The Australian Geomechanics Society has published a series of Geoguides to help manage development on hillsides in Australia.

We look like having something similar in Tasmania – our own geo(tech)guides, specifically developed for our own slopes and varied geology.  Mineral Resources Tasmania has this month commissioned me to put together a series of geotechnical templates summarising in compact form useful geotechnical information for hillside development on each of the main geological units in Tasmania.

These will complement The Tasmanian Landslide Code: Geotechnical guidance for regulators and practitioners, my draft 2014 guidelines currently doing the regulators’ circuit. 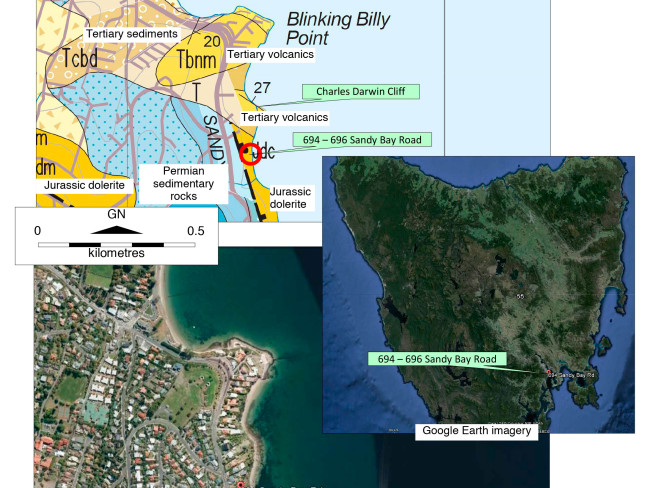 In my travels around coastal Tasmania I often come across aboriginal middens – many (but not all) of which are probably included in the list of 12,000 or so cultural sites on the Aboriginal Heritage Register (AHR). [The AHR replaced the Tasmanian Aboriginal Site Index (TASI) in 2014.]

The Register is maintained by Aboriginal Heritage Tasmania (AHT) a division of the Department of Primary Industries, Parks, Water and Environment (DPIPWE). The fundamental aims of AHT “are to protect, conserve and promote Tasmania’s unique Aboriginal heritage for the benefit of present and future generations of Tasmanians.”

Physical evidence of aboriginal heritage is a “relic”, the management of which comes under the Aboriginal Relics Act 1975. This Act is likely to be replaced by the Aboriginal Heritage Protection Bill, which broadens the definition of “relics” to “Aboriginal objects” and “Aboriginal places”, each of which are of “significance to Aboriginal persons”.

I understand that members of the public don’t have direct access to the Register, so without formally approaching AHT it is not clear to me whether the following two aboriginal places have already been discovered and officially recorded:

I’m collaborating with expert coastal geologist/geomorphologist Chris Sharples to report on an unusual occurrence of boulders at the extreme northern tip of Bruny Island in southern Tasmania. The rounded, moderately-graded, mostly dolerite boulders (and cobbles) up to half a metre or so in size form an arcuate foreshore several metres high and extending a few hundred metres east from Dennes Point past Kellys Point.

Recent coastal erosion has exposed dolerite boulders and cobbles present under sand on neighbouring beaches to the south, and a spit of dolerite boulders has formed between low and high water mark on Boulder Point.

Some say the boulder deposit is man-made – possibly ballast left by ships. A moment’s reflection shows this can’t be true: on the world stage, dolerite is a rare rock and is hardly likely to have been carried from overseas in large amounts by arriving ships; furthermore, departing vessels would either be in cargo or ballast, and if the latter, would hardly have dumped it just after leaving Hobart for the open sea. In any case, rounded boulders are scarcely a safe cargo in a rolling ship.

Dolerite boulders occur elsewhere on foreshores on the western side of the Derwent Estuary – notably from Taroona north to near Blinking Bill Point at Sandy Bay – where they are clearly being winnowed out of Tertiary-age boulder beds. On the northern tip of Bruny Island, Chris thinks the arcuate form of the boulder deposits wrapping around Kellys and Dennes Points is a rare recurved boulder spit, probably formed from winnowed boulders moved by storm swells refracting into the northern end of D’Entrecasteaux Channel.

Recurved sandy spits are a relatively common feature on the Tasmanian coast, but are rare in material as coarse as these boulders.

Locally, the boulders appear to be actively eroding from a weakly cemented conglomerate on Kellys Point. I think the conglomerate was formerly much more extensive, is probably Tertiary in age, and was the source material for the recurved spit.


Coastal planning and policy in Tasmania has been hindered by a use of ambiguous and undefined terminology in relevant coastal planning policy documents, notably the Tasmanian Coastal Policy (1996) and in some Local Government Planning schemes. The use of such terminology to define appropriate and inappropriate areas for coastal development has previously and will continue to result in vexatious planning disputes and poor coastal planning outcomes until it is corrected….

So says Chris Sharples in the Introduction to his discussion paper The problem of the use of ambiguous terms in Tasmanian coastal planning policy documents for defining appropriate coastal development zones (May 2012).

Inappropriate coastal landform terminology in Planning Schemes and legislation is holding back coastal development. Chris’s paper tries to sort out conflicting and out-of-date thinking, and it should be mandatory reading for all of us working in this area.

Chris has kindly allowed me to make his paper freely available as a downloadable pdf on this website (link below). Hopefully it will generate some comment.

The published 1:25,000 scale digital geological map of the Hobart metropolitan area shows the OAK Tasmania’s Walkabout Industries site in Clydesdale Street, Glenorchy, and the neighbourhood, to be underlain by Jurassic-age dolerite.

New field evidence suggests the map needs to be amended.

In 2011 bulk excavations at OAK provided excellent exposures of weakly-consolidated, orange-brown boulder beds (see photo). The clasts in the material are almost entirely angular to rounded dolerite cobbles and boulders up to about 0.5m in size, with a few percent of smaller clasts of chert, and Parmeener Supergroup siltstone and sandstone.

In July 2013, a 9.6m deep auger-and-diamond drill hole sited adjacent to the excavation encountered 5.6m of similar doleritic boulder beds, overlying conglomerate composed entirely of Parmeener Supergroup sandstone and siltstone clasts to 50mm in a non-plastic silt/sand/gravel matrix. A band of pink/orange silty clay occurred in the conglomerate over the 5.90-6.05m depth interval. See the photo of the core, and the log of the hole.

I interpret the deposits in the excavation and drill hole to be Tertiary in age and of similar fault-scarp related origin to other boulder beds in the Hobart district. I think the thin horizon of silty clay in the drill hole could be volcanic ash. It is not clear how far the Tertiary deposits extend laterally from the OAK Tasmania site.

Here’s a graph of some 860 earthquakes and their magnitudes recorded in the Tasmanian region over the period 1958 – 2014. It’s a picture of quiet earthquake periods lasting several years interrupted by years of much more intense activity.

The information is freely available on the Geoscience Australia website.

If you are able to access Google Earth (you will need the Google Earth software for PC, Mac or Linux), you can see the distribution of the same earthquakes on the satellite image of Tasmania in the .kmz file below. (I’m an IT amateur: David Winkle at A. S. Miner Geotechnical set up the .kmz file for me.)

Instructions for viewing the file are as follows:

A very similar map of earthquake epicentres in the Tasmanian region appears in the beautifully comprehensive Geological Evolution of Tasmania (2014) published by the Tasmanian Division of the Geological Society of Australia.

Information about earthquake magnitudes is summarised in the two tables following. (The estimated number of earthquakes each year in the first table is the worldwide number.) The Tasmanian earthquakes range in magnitude class from (less than) Minor to Light, with two quakes (in January 1958 and May 1969) of magnitudes 5.3 and 5.2 respectively edging into the Moderate class. Earthquake activity not shown on the graph and map included many small and some large quakes in northeastern Tasmania during 1883 – 1885.

Earthquakes are also classified in categories ranging from minor to great, depending on their magnitude.